If you are searching for the Healthy Brain & Memory Center, please click here.

The History of Polisher Research Institute

Established in 1959, the nationally-recognized Polisher Research Institute is the first research center in the U.S. to be sponsored by a geriatric facility.

The Institute is named for the late Edward N. Polisher, Esq. (1902-2004), who was an honorary vice president of the Abramson Center for Jewish Life's board of directors, and his late wife, Esther. Mr. Polisher, who was involved with the Center for more than 30 years, devoted himself to improving the well-being of the elderly through the Center's various programs and research efforts.

Throughout its long history, the Polisher Research Institute (PRI) became known for its pioneering research into the psychological, social, and medical aspects of aging. PRI is also the first in the country to design environments for nursing home residents with Alzheimer's disease. Institute researchers advanced the concepts of "case management" and of a "continuum of care" for the aged, and developed numerous standardized tools for assessing older people's quality of life. Their research has inspired the design and environment of our campus' residential areas and influenced specialized housing for the aged throughout the country. 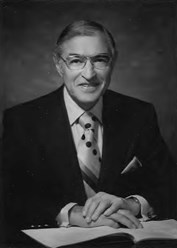 The Board of Directors of the Abramson Center for Jewish Life record with sorrow the passing of their esteemed colleague and friend, Edward N. Polisher, Esquire, a generous and devoted supporter of the elderly.

Mr. Polisher was a member of the Center’s board for over 40 years. As chairman of the Center’s Development Committee, Mr. Polisher paved the way for raising the funds needed to construct the first nursing home designed for persons with dementia, as well as for dementia research, on the Center’s former Philadelphia campus. In 1976, the board recognized his outstanding dedication by electing him honorary vice president. The Abramson Center Auxiliary presented him with their Tribute Award in 1978.

Gerontological research was Mr. Polisher’s passion. He strongly supported the Center’s research institute, which was renamed the Edward and Esther Polisher Research Institute in 1988 in his honor. In 1995, he was recognized for his work on behalf of the Center and the aged by the Center’s medical staff, which presented him with its bi-annual Medical Staff Award. The following year, the Center honored Mr. Polisher at the Rainbow Ball by presenting him with its highest honor, the Family Award.

Mr. Polisher provided a shining example of how the last of life should be lived. Even after passing the centenarian mark himself, Edward Polisher still pursued his professional and charitable interests, including serving on the Center’s board. To his surviving family, his children Philip Nalibotsky and Linda Saltz, his nine grandchildren and eight great-grandchildren, and all who mourn his passing, the Board of Directors of the Abramson Center for Jewish Life offer this expression of profound sympathy. May they find solace in the knowledge that he served an integral role in the Polisher Research Institute’s history, and his dedication to furthering research into aging and care of the aged will improve the lives of the elderly for generations to come.